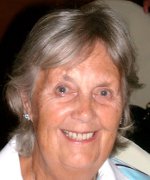 None of my family ever went to church except for weddings, Christenings and funerals, but my sister and I were always sent to Sunday school every week without fail, no matter what the weather.
During the war we attended a tiny chapel - Gospel Hall, it had forms for seats and I can still remember the smell of polish and old books. The Principal was a gentle, soft-voiced man assisted by two sisters, who told us stories about a man called Jesus.  To me it was just that – stories, and God was an old man up in the sky who knew when you told lies or stole a bun from the local shop when you were hungry.

After the war we moved back from my grandmother’s house to our own house, and my father came home after 5 years away.  I had looked forward to that, but the man who went wasn't the same man who came back.

Our next Sunday school was at the local Parish church, there were a lot of children there and the teachers were very nice ladies, but once again - stories and we were given little pictures to stick in our little books.  I thought the pictures depressing, men in robes and pious women who always had their eyes turned to heaven. I didn’t think much of Sunday school and played hooky whenever I could. (Awful child!)

The one good thing about this church was they had a great social club, and as we got older we were allowed to go to the dances and at an early age, 11 or 12, my friends and I learnt to dance the quick-step etc. The church was our social life until we were 16 or more. I have very fond memories of this time and this was also about the time that my friend and I started to attend the Evensong service every week.  Had we seen The Light? No.  We had seen the good looking boys in the choir…
I drifted away from the church, met and married my husband and went to live in Coventry. Norman was in the fire Brigade and worked 12 hour shifts. After 11 months we had our first lovely baby boy, Mark, followed 5 years later by his sister Louise. By this time we had managed to buy our first house on a new estate, and most of the families were like us, big mortgages, no cars and a bus only 2 to 3 times a day.  Social life – zero!

One day a leaflet came through the door.  It said the Curate at the distant parish church had bought a house on the estate and was holding the first service on Sunday at the little school a mile away. It was a big effort to get there with the children, but I made it in time.

Only three little families were at that first meeting, but Harry Wilson the Curate and his wife Wendy lost no time in starting a friendship club for the ladies, and a Bible group with just 2 or 3 people. I had been to a Church of England school for 5 years and a Sunday school until I started work, yet I had never understood why Jesus had died on the cross until Harry Wilson opened my eyes to the Gospel. Until then the Bible was just a book that was read in church. I had never taken much notice of it. It was just an old book.

Six months later we went to a Billy Graham rally from London and I went forward to become a born again Christian.

We have moved houses quite a lot since then, but we have always found a church to attend, some good, some not so good. Bethel church in Coventry was a great church, the minister was a gem. If we missed going 2 weeks he came looking out for us.  Our two eldest children received Christ there while in  Sunday school.  End of story? No!

We moved back to Lancashire when Mark was 19 and Louise 14, and our youngest son Simon 8. We found a church and we felt happy there, although the Vicar was young and very ambitious (he is now a Bishop!) We got on OK. Then one or two manipulative angry people joined our church. They found fault with everything that didn't put them centre stage. It happens sometimes in churches, but this was nasty. I became angry and disillusioned, so I left and after 28 years of being a Christian, my faith hit rock bottom.

The only way to describe how I felt was that I was in a room that was bare and bleak. The room was called Christianity, and in that room there were closed doors, and I wanted to open every one – so I did.

The first door led to books on mind, body and spirit, some of them did open my mind.  Another door led to the Quakers. Next Buddhism, next Islam, next Agnosticism (no joy there). What was I looking for?  God and the faith I had lost. It was a long journey and took 10 years and I learned a lot not only about God, but about myself.

Now I realise God never lost me. I was on a learning curve, looking in all the wrong places, but it did teach me that Christianity is the only religion to offer us the free gift of God’s love and salvation.  A gift bought with a price. Jesus on the cross paid the price, once and for all.
This hymn tells my story the best:


I heard the voice of Jesus say
Come unto me and rest.
Lay down thou weary one, lay down
Thy head upon my breast.
I came to Jesus as I was
Weary and worn and sad
I found in Him a resting place
And He has made me glad.

End of story?  NO.  It’s only just the beginning. One more step every day.